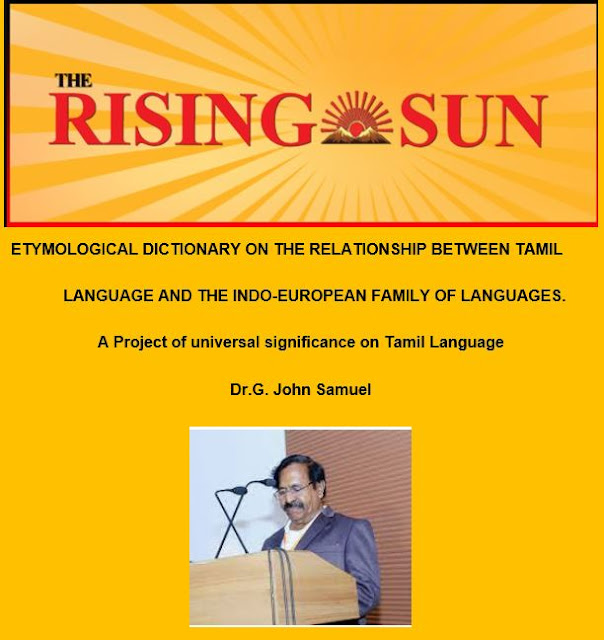 ETYMOLOGICAL DICTIONARY ON THE RELATIONSHIP BETWEEN TAMIL

LANGUAGE AND THE INDO-EUROPEAN FAMILY OF LANGUAGES.

A Project of universal significance on Tamil Language

The Tamil traders were followed by the Tamil Buddhist monks who travelled to various parts of Asia with a view to spread the teachings of the Buddha which was deeply rooted in the Tamil soil during the later part of the Sangam age up to the age of the Pallavas when Bodhidharma and many other monks travelled to China, and East Asian countries of Korea, Japan etc. The naval power of the later Cholas bring Tamil language and culture closer to many countries of South East Asia. The advent of the European traders, Missionaries and the British rulers enabled the spread of Tamil language and culture to Europe and many Tamil lexical forms entered into all European languages.

Now, it is a matter of deep pride that no other linguistic community of the Indian peninsula has had such a wide range of commercial and cultural contacts with other countries from a very remote past to the present days, as the Tamils. The language and culture of the Tamils have exerted an extensive and profound impact on the linguistic and cultural heritages of the major part of the world. All these glories have been thrown into oblivion in the middle ages because of the unfortunate intrusion of Sanskrit learning and the patronage extended to this language by the Tamil kings.

The vibrant Tamil diaspora settled at present in more than 60 different countries are considered to be as powerful as the Jewish community. Consequently any indepth and holistic research on Tamils in the present day should take into consideration the three major components of the Tamil ethos namely the native Tamils, the Tamil diaspora and the international Tamil scholars of non - Tamil origin.

The Dravidian movement in Tamil Nadu fought continuously for the revival of the past glories of the Tamil land and to save this great culture from the onslaught of the Aryan forces. Their efforts coupled with the great achievements of the European missionaries and the contributions of international scholars of non-Tamil origin brought out drastic changes in the milieu and mentality of Tamil Nadu and a new way of looking at Tamil Culture as a significant component of world culture was inaugurated in due course. New projects on Tamil language and literature from this perspective are now taken up by the leading research centres and universities all over the world.

One such project on Tamil language with a global perspective is the preparation of a multi volume Etymological dictionary for Tamil language which highlights the relationship between Tamil and the Indo-European family of languages announced in the Tamilnadu Govt's budget for the financial year 2022 - 2023 with an estimate of Rs. 2 crores. It is clearly mentioned in this budget that the preparation of this ambitious project is in line with scientific objective methodology giving no rooms for baseless inferences of subjective character and it should be monitored by a committee of Tamil etymologists.

This is indeed a great venture and a daring effort of the Government of Tamil Nadu in its attempt to earn global status to our mother tongue. The Hon'ble Chief Minister deserves the appreciation of all international Tamilologists for his firmness and courage coupled with deep reverence to the great Tamil ethos and his emotional attachment to our great heritage. This announcement made on behalf of the Government of Tamil Nadu is completely in harmony with the supreme international dignity which our Tamil language has earned in the present socio-political milieu.

Now, Tamil is not merely a provincial language as it was conceived before the 18th  century. It is not even merely a national language of this country. It has grown to the level of an international language, with firm roots in the Indian soil, and aerial roots in Sri Lanka and Singapore - where it has been given the status of an official language, as well as around sixty different Diaspora countries all over the world where Tamil immigrants live in groups for centuries together. Among the Indian languages, Tamil alone enjoys a global status equal to Sanskrit, in that it has been subject to serious academic research in leading universities and research centres the world over.

Unlike Sanskrit, it has a dual status - both classical and modern - a language throbbing with life. Several academicians of the world have now put their heart and soul into Tamil studies, comparing Tamil or Dravidian language with the other families of languages, translating Tamil classics into many of the languages of Europe and Asia, and undertaking in depth academic studies on the linguistic and cultural traditions of the Tamil speaking community with a wider global perspective.

The proposed etymological dictionary project announced in the Legislative Assembly with a wider objective academic perspective will definitely cater to the needs of a wide ranging scholars and public at the international level - from the Tamil native speakers of the Indian peninsula, the Tamil diaspora community living in more than sixty countries all over the world and international Tamil scholars of non - Tamil origin belonging to various countries of the world.

Popular posts from this blog

It is impossible to begin writing about Tamil language and Tamil literature on the world wide web without paying tribute to the pioneering work of Dr. Bala Swaminathan, Dr.Gnanasekar Swaminathan, Dr. Vijayakumar Sinnathurai and Krishnaswamy Srinivasan, in Canada, Kuppuswamy Kalyanasundaram in Switzerland, Naa. Govindasamy in Singapore , Muthulilan Nedumaran and Sivagurunathan Chinniah in Malaysia, Siddharthan Ramachandramurthi , P.Kumar Mallikarjunan in USA, and Sinniah Ilanko in New Zealand. Dr. Sundara Pandian, Dr. Meenan Vishnu and C.R. Selvakumar in Canada, amongst others, contributed to the formation of the Soc.Culture.Tamil newsgroup which provided an early electronic forum for discussion on Tamil language, literature and culture. The work of the SCT, and the efforts of Kumar Kumarappan in California, led to the establishment of the first Tamil Chair in North America at the University of California at Berkele
Read more